Technical gases for the food sector 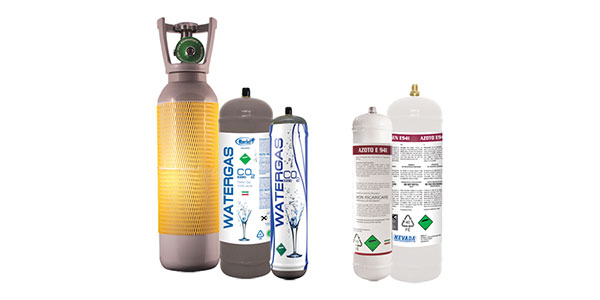 Mariel not only operates in the refrigerant gas sector, with the Nevada Refrigerants brand, but also offers solutions for the world of food gases, treating argon E938, nitrogen E941 and carbon dioxide E290.

Our disposable cylinders are available in various formats (from 300 gr, 600 gr, 1.3 Kg, 4 Kg and 10 Kg). furthermore, the cylinders can be used with the main domestic gassers on the market and can be used in various sectors such as wine, beer, water and much more. Some models also have a residual valve.

Carbon dioxide – in the food sector E290 – is used as a propellant for tapping (mainly beer, but there are those who also use it for wine). Furthermore, carbon dioxide is the food gas used in the household gas cylinders, to ‘’gass’’ natural water, making it sparkling.

Nitrogen is used in the food sector for the inertization and bottling of wine. Going to fill the empty part of a wine bottle with nitrogen prevents the drink from oxidizing when it comes into contract with oxygen. In some cases, even nitrogen is used as a propellant for wine and beer taps.

Argon gas is a noble gas which, in the food sector, is mainly used for storing wines. In particular, during the bottling phase, it is used to maintain the quality of the wine, also thanks to its being odorless, tasteless, non-corrosive and non-flammable.

Oxygen: the most famous gas

Perhaps the best known and among the most widespread gases on our planet (especially in the Earth’s atmosphere), Oxygen is used in many food sectors (for example as an E948 additive), but also in the therapeutic/hospital sector, as a drug (when speaks of medical oxygen), in hyperbaric chambers and in oxygen therapy.

Mariel, a company specializing in the world of refrigerant gases and chemical equipment and components – for installation, maintenance, charging and diagnosis – offers solutions to analyze the status of civil and industrial refrigeration systems and air conditioners both for cars and commercial vehicles.

This website uses cookies to improve your experience while you navigate through the website. Out of these, the cookies that are categorized as necessary are stored on your browser as they are essential for the working of basic functionalities of the website. We also use third-party cookies that help us analyze and understand how you use this website. These cookies will be stored in your browser only with your consent. You also have the option to opt-out of these cookies. But opting out of some of these cookies may affect your browsing experience.
Necessary Always Enabled

Any cookies that may not be particularly necessary for the website to function and is used specifically to collect user personal data via analytics, ads, other embedded contents are termed as non-necessary cookies. It is mandatory to procure user consent prior to running these cookies on your website.